For the past three years, I have had the privilege to say that I am a member of a great sorority. Unlike many people however, I can’t say that it was something that I “dreamed of” or “fantasized” about since I was young. Then again, that may be because I’m not like most people. Ever since I could remember, I knew my mom was apart of something. I was too young to know what a sorority was but I did know that she’d take me to meetings with her every week and I could prepare to be there for a few hours. The ladies were always nice and I could almost bet at least half of them would be wearing something with the same three letters on them.

When I was old enough to join a youth group, my mom did just that. (I was actually too young to be with the group that I was with but the advisor took me under her care and carried me through.) All throughout middle school and high school I remained with the group and as a result, I was constantly around the women of the organization. During this time, they never made me feel as if the organization was centered around elitism.

(elitism: the attitude or behavior of a person or group who regard themselves as belonging to an elite)

It was actually the complete opposite. The women were always all-inclusive of me and other people. They didn’t talk in codes, bunch in cliques at events, or anything that would give off an unapproachable image. So, when my senior year of high school came around, it was almost a no brainer to the women that had seen me grow that I would soon be a member of their organization. Little did they know, I had other plans. See, I loved them with all of my heart but I’d decided that I could wait until graduate school to join.

When I entered my unive 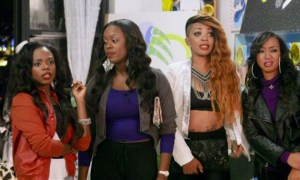 rsity as a freshman, sororities were the last thing on my mind. I joined the NAACP, which was about all that we (freshmen) could join at the time due to a previous hazing incident surrounding the campus. I didn’t attend any sorority sponsored events and I couldn’t name you two people in a sorority on campus if my life depended on it. One night, I went with my mother to a scholarship banquet in which a few members of the undergraduate chapter were in attendance. A friend of mine asked me to ask them if they were having a line soon, (a dated name for new members of the organization). Me, not knowing proper greek protocol, went and asked. I can’t remember their responses but I do recall the disgusted looks on their faces. It were as if I’d said I were voting for Donald Trump as the next president. I soon learned that I’d made the wrong move.

One thought on “So You Want to be Greek?: The Beginning”