This morning after church I want to the 10 a.m. showing of ‘Sorry to Bother You’, a film by Boots Riley.

I’d been trying to go see it for a few days now but for some reason I kept delaying the task of driving to the theatre, picking a seat, being disappointed by concession prices… you know, the usual. But today I forced myself to go see it mainly because I am still hype off of seeing Equalizer 2 yesterday morning. (No worries, I won’t spoil Equalizer but you should definitely see it soon)

It begins with Cassius Green who’s obviously desperate for a job… so much so that he’s paid for a trophy and plaque to reiterate the lies on his resume. He even went as far as to use his friend’s phone number as a reference but the manager calls him out on it because, well duh- it was all falsified. However, in an unlikely turn, the manager sees Cassisus’s effort as an asset and decides to hire him to work at this telemarketing firm. Cassius is obviously facing hard times because he’s living in his uncle’s garage and paying $0.40 (no, that isn’t a typo) to get a drop of gas in his beat down car. 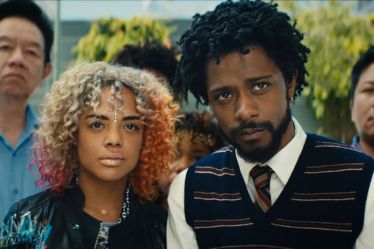 While working at this company an older guy, played by Danny Glover encourages him to use his “white voice” to get better results. He takes the advice and before long he’s what they refer to as a “power caller”. Power callers are revealed to be selling human labor to overseas companies through this new corporation called Worry Free.

Worry Free’s advertising emphasizes how tenants sign a life long contract for food and housing in exchange for labor and surprise! It looked as much like the prison industrial complex as it sounds. The rooms, food trays, matching uniforms all mirrored prisons today.

While his comrades from downstairs are fighting for labor and better pay, Cassius gets caught up in the glitz, glam, and money he makes by being a power caller. So much so that he loses his friends, girlfriend, and decent moral compass.

His manager encourages him to attend a party hosted by Steve Lift, the founder of Worry Free. While there, he’s put on the spot as Steve tries to get Cassius to rap because you know… all Black people can rap. (sarcasm) In this moment, I could see Cassius feeling how many of us feel- like the token person of color in an environment that doesn’t fully accept us for who we are.

Later on at the party while Steve is trying to offer Cassius a proposal to be the “Martin Luther King” of Worry Free, he realizes that he really has to use the restroom. On his quest to find the correct bathroom door, he finds a room of half-horse, half-man things… I know. Trippy right?

After finding out that this is what Worry Free is really doing, Cassius must do what is right and let the world know about this disgrace and he does except… political leaders supported it and the stock prices rose tremendously after he aired the dirty laundry. A satire, through and through, the movie could be likened to many things happening today.

That’s what I loved about the movie but also what it made me realize I hate about the system we are living in right now. Many of us sit back, just like Cassius because something isn’t effecting us directly, and let things pass without second thought. I don’t want to spoil the ending just because it’s something I can’t quite put into words.

If you have an open mind and are in the mood for something mind bending, be sure to see ‘Sorry to Bother You’ before it leaves theaters and come back to let me know what you think.

See you soon, From Me to You, Love.